Save the Baltic Sea prize to 4D Scavenger technology

The Suomen messusäätiö awarded Weeefiner's 4D Scavenger technology with the Save the Baltic Sea 2022 award. The uniqueness and replicability of the technology and the promotion of a circular economy were mentioned as selection criteria. 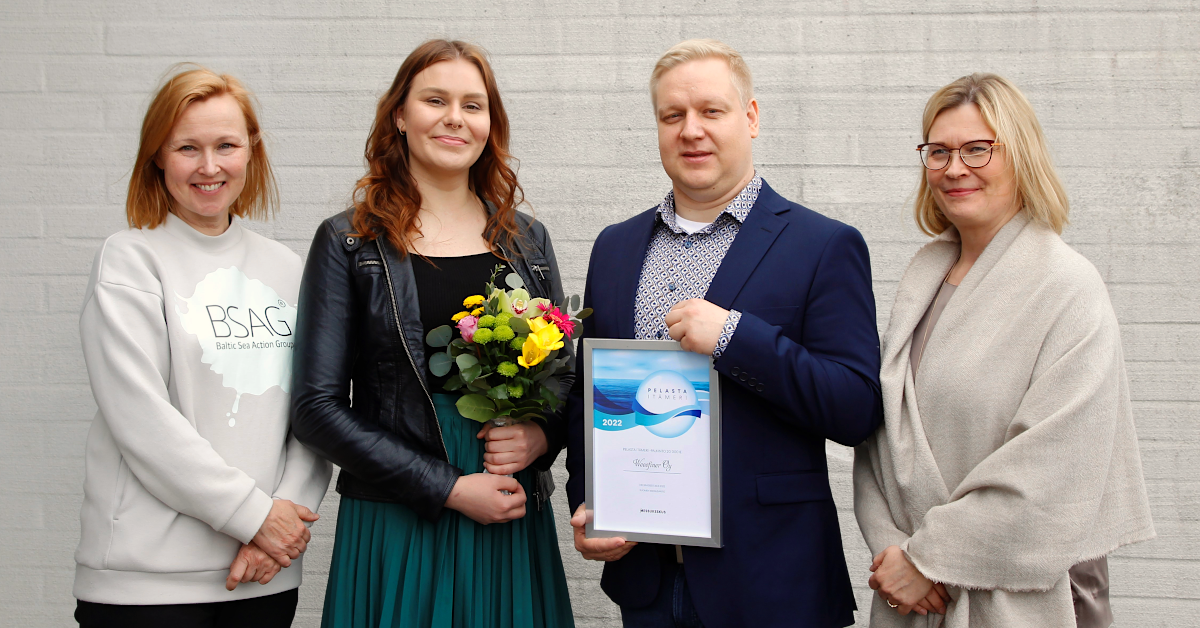 The Finnish Fair Foundation's prize was awarded for the fourth time and Weeefiner received the prize. The aim of the award is to draw attention to the state of the Baltic Sea every year and to reward those who have done valuable work for the environment.

“We are specifically looking for an innovation that can clearly improve the state of the Baltic Sea. Rescue work in the Baltic Sea requires concrete equipment and means which will not damage the ecosystem themselves. Weeefiner has developed equipment that has both commercial potential and an international need”, says Annamari Arrakoski-Engardt from the John Nurminen Foundation.

“Weeefiner’s 4D Scavenger technology focuses on removing these harmful substances, of which it is really challenging to catch soluble heavy metals,” Arrakoski-Engardt explains.

With 4D Scavenger technology, industrial by-products and runoff water can be cleaned of dissolved heavy metals before entering the sea. This would otherwise require complex and expensive investements.

"The easiest and most concrete way to prevent harmful substances from entering the Baltic Sea is to provide industrial plants and companies with equipment that can be connected directly to existing water systems," says Mikko Hänninen, Chief Operating Officer of Weeefiner.

Weeefiner's technology is based on 3D printing, which has never been used to remove metals. The unique manufacturing method allows chemical activity to be added to the 3D printout, bringing another dimension to the technology. In this way, we can generate exceptionally selective and efficient filters from already commercially available materials.

At the same time, the innovation enables the recovery of heavy metals, allowing them to be returned to industrial use. Metals can either be reused directly, processed into new raw materials, or disposed of properly. This can significantly improve material circulation and reduce the need for virgin raw materials.

Prize money will be used for product development

"Thank you to the jury and the players involved. It's great to see that our technology is recognized with such a significant award.Thank you also to our team, who has worked hard to get the first products on the market, " Hänninen thanked at the award ceremony.

However, there is still a lot of work to be done to bring Weeefiner's solutions to market on a larger scale and to take them forward internationally.

"The prize money will be used for product development and advancement."

Aiming at nutrient removal and recovery

Weeefiner is a technology company born at the Department of Chemistry of the University of Jyväskylä, which offers innovative solutions for material recovery and streamlining industrial processes. Our goal is to challenge traditional notions of water treatment and the circular economy by transforming unused resources into a sustainable and profitable business. Read more at www.weeefiner.fi

About the Save the Baltic Sea Award

The Finnish Fair Foundation distributes the award in cooperation with the Baltic Sea Action Group, the John Nurminen Foundation, Keep the Archipelago Tidy and Tekniikka & Talous magazine. It has been possible to send suggestions in advance about the winner. The jury was chosen by the jury, which included Annamari Arrakoski-Engardt from the John Nurminen Foundation, Aija Kaski from Keep the Archipelago Tidy, Michaela Ramm-Schmidt from the Baltic Sea Action Group and Harri Junttila from Tekniikka & Talous.

The award was also of interest to the media, and Weeefiner visited MTV3's news morning to talk about Weeefiner's operations and 4D Scavenger technology. Baltic Sea Prize in the media:

Allow remembering your language choice or geographical area. This information is used to enable a personal user experience and to facilitate the use of the website. If you do not allow these cookies, some or all features of the website may not work.

Collect information about the use of our website, such as visits to the website and error messages. This information is combined and anonymized and used to develop our website.